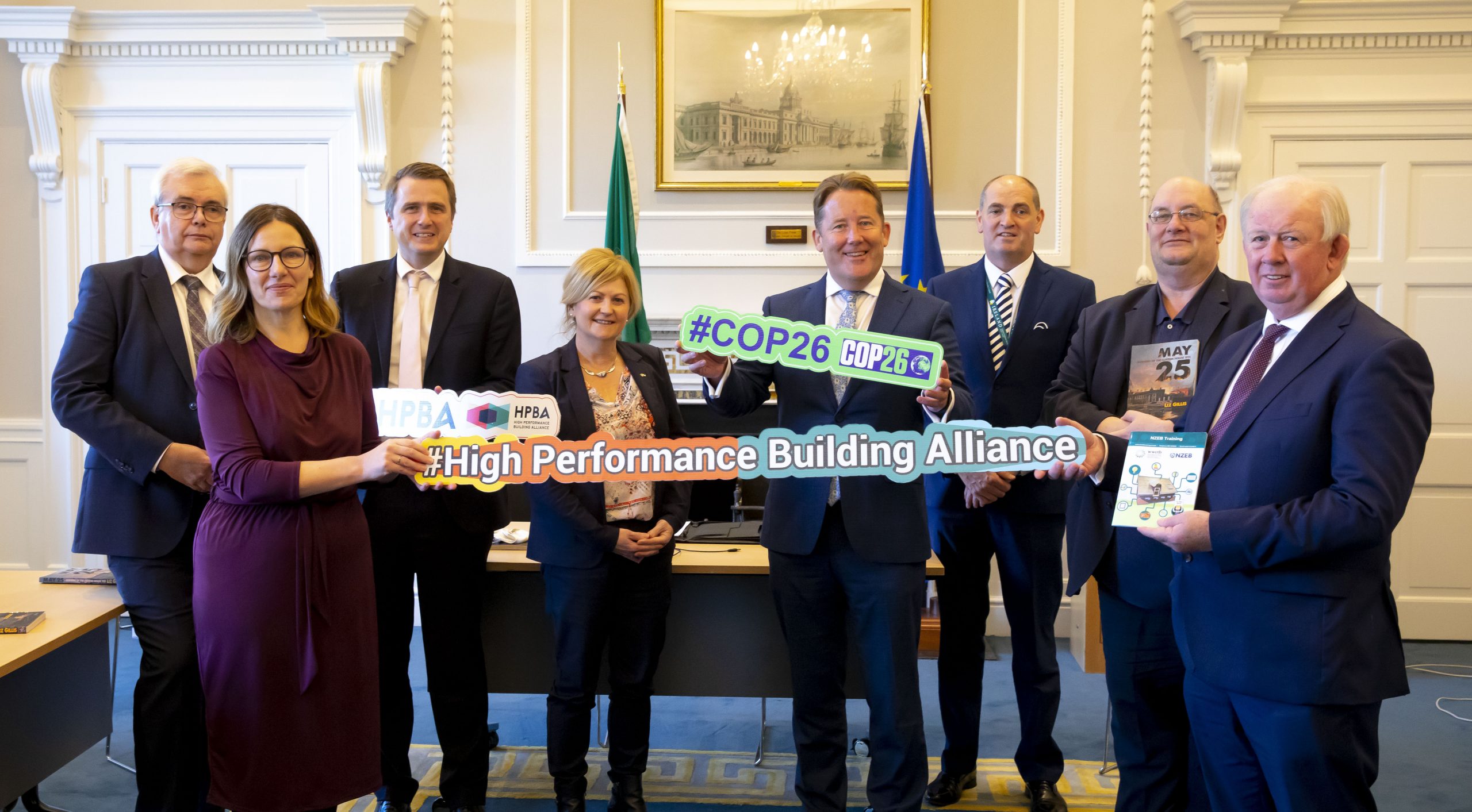 UN Centre of Excellence designation for Wexford announced at COP 26

UN Centre of Excellence status is announced for the High-Performance Building Alliance (HPBA) based in Enniscorthy, County Wexford.

Minister Darragh O’Brien and Cllr. Barbara Anne Murphy Chairperson of Wexford County Council signed a memorandum of understanding declaring the HPBA as a designated UN Centre of Excellence at the COP 26 climate change conference. The initiative signals Ireland’s commitment to the sustainable and energy-efficient development of buildings in an initiative led by the United Nations Economic Commission for Europe.

Minister O’Brien stated “he was delighted to sign the UN agreement on behalf of the Irish Government which will see the HPBA Centre of Excellence based at Enniscorthy as a global leader in energy efficiency and in assisting with the retrofitting and building of new homes, reducing carbon emissions while providing warmer homes”. Minister O’Brien added, “I want to commend the leadership of Wexford County Council (WCC) and Waterford and Wexford Education and Training Board (WWETB) who worked together to establish the centre of excellence as the first provider of Near Zero Energy Building (NZEB) social housing and the first Education and Training Board to provide NZEB training nationally with over 1,000 people trained to date at the WWETB NZEB Training Centre in Enniscorthy”.

Cllr. Barbara Anne Murphy, Chair of the HPBA, WCC and WWETB addressed the live stream COP 26 climate conference in Glasgow from Ireland’s government buildings and stated that “the High-Performance Building Alliance is determined to be a leader and champion of high-performance energy buildings and to increase knowledge, capacity and demand for low carbon emissions buildings. In particular, she emphasised that “the HPBA will advance innovation and lead in the use of sustainable solutions through collaboration with the Global Network of Centres of Excellence.”

The UN Centre of Excellence at Enniscorthy is already named as a key driver in reducing carbon emissions in the built environment and providing training for the construction industry in the National Development Plan. The UN status now elevates the HPBA to represent not just Ireland but to be a global leader working in collaboration with UN centres from other nations.

The HPBA and Minister O’Brien pledged at COP 26 to support the UN Sustainable Development Goals and the COP 26 goals. The built environment and construction sector is central to tackling climate change, with buildings consuming as much as 70% of the electricity generated globally and accounting for 40% of Co2 emissions. High-performance buildings are designed to use minimal amounts of energy for heating, cooling, lighting and ventilation with a range of benefits for both the environment and the people who live and work in them.

By providing education and training and other critical resources the centres will support the construction sector to move forward in line with the UN framework guidelines for Energy Efficiency Standards in Buildings.

The WWETB flagship Enniscorthy training centre model funded by SOLAS, is now being rolled out by the Irish government to four other regional centres in order to ensure the industry has trained and skilled staff in working in the delivery of NZEB both new and retrofit.

The Board of the HPBA involves a number of key stakeholders, government departments, state agencies, NGO’s and members of the industry including Tomas O’Leary from Mosart architects, an industry leader in energy-efficient buildings in Ireland.

It is expected in 2022 that WCC and WWETB the funders of the HPBA initiative will host an international event to launch the UN centre in Enniscorthy and to showcase international speakers on how the built environment can address climate change while providing more energy-efficient homes for people.

We use cookies on our website to give you the most relevant experience by remembering your preferences and repeat visits. By clicking “Accept All”, you consent to the use of ALL the cookies. However, you may visit "Cookie Settings" to provide a controlled consent.
Cookie SettingsAccept All
Manage consent

This website uses cookies to improve your experience while you navigate through the website. Out of these, the cookies that are categorized as necessary are stored on your browser as they are essential for the working of basic functionalities of the website. We also use third-party cookies that help us analyze and understand how you use this website. These cookies will be stored in your browser only with your consent. You also have the option to opt-out of these cookies. But opting out of some of these cookies may affect your browsing experience.
Necessary Always Enabled
Necessary cookies are absolutely essential for the website to function properly. These cookies ensure basic functionalities and security features of the website, anonymously.
Functional
Functional cookies help to perform certain functionalities like sharing the content of the website on social media platforms, collect feedbacks, and other third-party features.
Performance
Performance cookies are used to understand and analyze the key performance indexes of the website which helps in delivering a better user experience for the visitors.
Analytics
Analytical cookies are used to understand how visitors interact with the website. These cookies help provide information on metrics the number of visitors, bounce rate, traffic source, etc.
Advertisement
Advertisement cookies are used to provide visitors with relevant ads and marketing campaigns. These cookies track visitors across websites and collect information to provide customized ads.
Others
Other uncategorized cookies are those that are being analyzed and have not been classified into a category as yet.
SAVE & ACCEPT